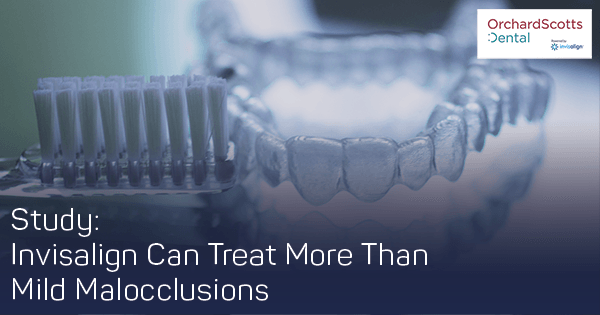 In the past, dentists recommended Invisalign for only mild malocclusions, but this study proves Invisalign is beneficial for more serious treatment, too.

In 1999, Invisalign technology was introduced to the world of dentistry, just in time to welcome in the age of 3D technology that was about to begin. Upon its introduction to the orthodontic market, the Invisalign system was described as a way of treating mild dental problems, such as closing spaces between teeth, and remedying minor crowding issues. Invisalign in Singapore has also been a very popular and well-known solution for straightening teeth for non-servere cases.

However, as years have passed, and technology has continued to advance, the Invisalign system has been improved upon; today, the Invisalign manufacturers report that Invisalign aligners can succeed in actually causing tooth movements, including initiating bicuspid derotations of up to fifty degrees, and root movements of the upper incisors. These advances are seriously monumental­ they would allow patients formerly forced to opt for braces because of the seriousness of their malocclusions to be able to ditch the braces for an effective Invisalign treatment.

Yet, for all the manufacturer’s claims, zero published information validating Invisalign aligners’ ability to incite tooth movement could be found. Thusly did colleagues Mareike Simon, Ludger Keilig, Jorg Schwarze, Britta A Jung, and Christoph Bourauel set out to conduct a study to investigate the efficiency of orthodontic treatment when using Invisalign vs fixed orthodontic appliances, like braces.

Purpose of the Study

The main purpose of this study was to discern the true effectiveness of the Invisalign system in regards to dealing with more advanced dental malocclusions. In particular, the study sought to prove or disprove Invisalign manufacturers’ claims that Invisalign was able to cause teeth movement.

Methods of the Study

In order to conduct the study, thirty individual patients who required Invisalign dental treatment were enrolled and observed over the course of 2011 to 2012. All patients were healthy individuals who had been treated with exclusively with Invisalign. In order to allow optimal analyzation, pre­treatment moulds and post­treatment moulds were made of each patient’s mouth. This allowed the inspection of the teeth for movement by comparing the moulds made before treatment with the moulds made after treatment.

The results garnered by this study served to speak volumes about the true efficacy and abilities of the Invisalign system. Invisalign aligners proved able, indeed, to initiate tooth movement­ the overall efficacy of the Invisalign system was an impressive 59%. In the case of treating and moving the upper molars, Invisalign proved incredibly effective: a whopping 87% of these particular cases were deemed exceptionally remedied.

The conclusions were welcome by many braces wearers: Invisalign is effective in dealing with incisor torque, premolar derotation and molar distalization.

How do these results lend themselves to the world of dentistry today? This study served to prove that dentists can now recommend Invisalign to more patients than ever before.